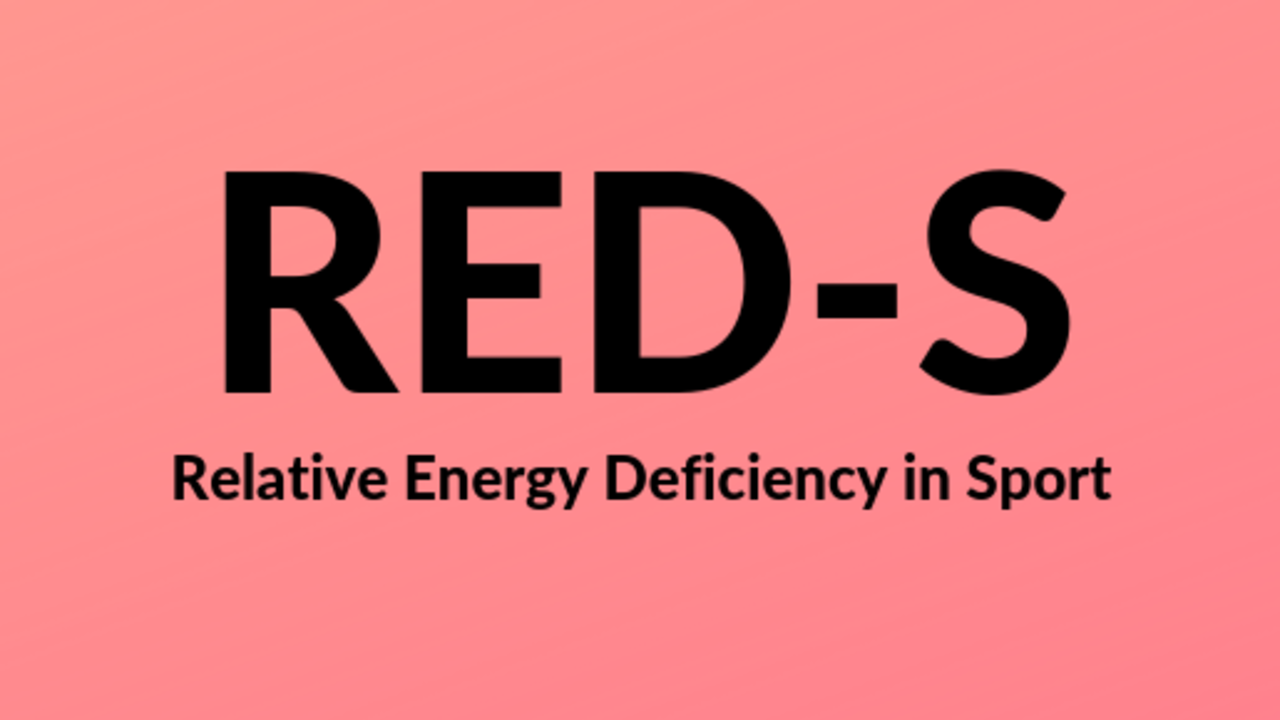 At Ulty Results, we’re committed to inclusivity, the growth of the sport, and helping athletes of all abilities to perform at their best. Tying into all these is a review of an increasingly-common syndrome that teammates, coaches, captains, and parents, especially of younger female players, should be aware of. Licensed Physical Therapist, Anna Kilbourn, gives us the lowdown on what RED-S is, what effects it can have, how to spot those at risk and support anyone going through it.

Ultimate players work hard. As the sport grows, athletes are training harder than ever to compete, and there has been a huge growth in ultimate-specific workouts designed to help players improve their speed, agility, quickness, power, and endurance. And with any sport, increases in training volume have risks. One you may not have heard of is Relative Energy Deficiency in Sport, or RED-S.

RED-S is a syndrome which occurs when athletes do not get adequate nutrition to support their high levels of training or competition. The syndrome was previously known as the Female Athlete Triad, since there is an increased risk to female athletes due to the biological relationship between menstrual function, bone health, and energy availability.

However, the scope of the syndrome was expanded after recent research found that low energy intake can impact metabolic rate, bone health, immunity, protein synthesis, and cardiovascular health in athletes of all genders.

Why does RED-S matter?

RED-S is most common amongst adolescent and college age athletes. There continues to be unnecessary pressure on young athletes, especially young women, to achieve a “thin” body type in order to succeed at sports.

We need to be aware of the potential for this to happen to athletes, especially as the sport grows and spreads to younger players. Coaches, captains, and players need to understand the potential risks, how to support athletes, and when to contact a medical professional.

What are the effects of RED-S?

Energy deficiency can happen due to a reduced calorie intake or due to burning more calories in training than are consumed. The potential impact if untreated can have serious consequences. 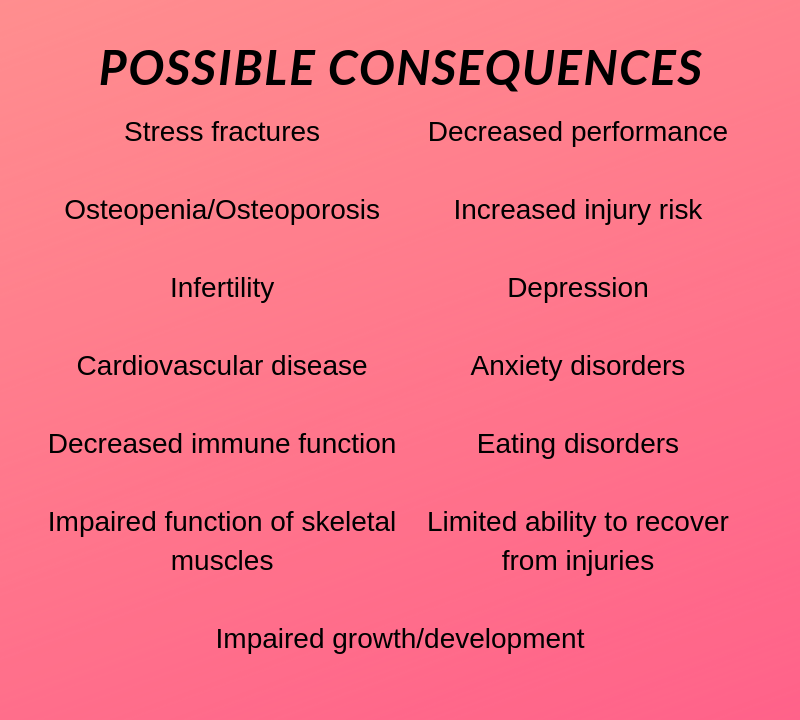 What should you look for?

Coaches, captains, and teammates should be aware that the following may indicate athletes at risk of RED-S: 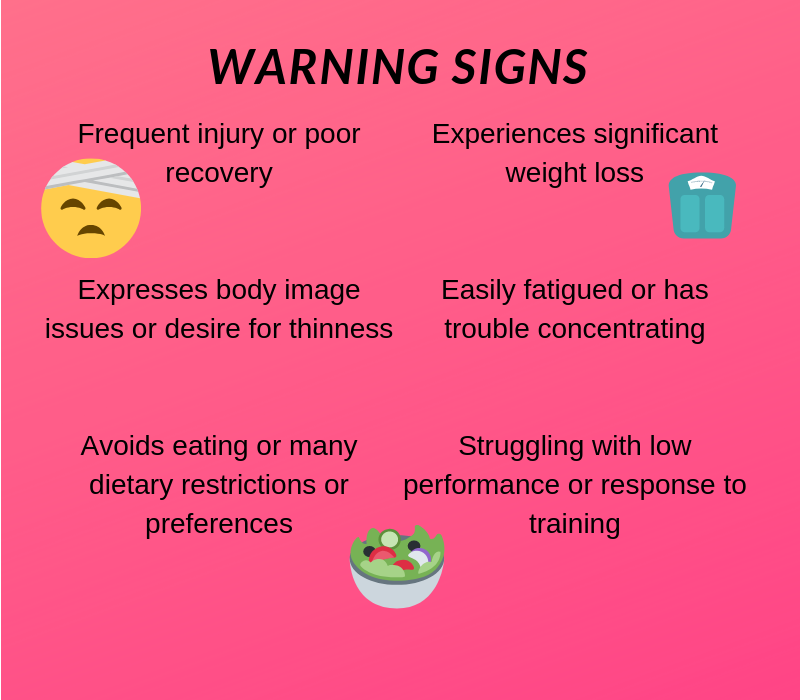 How can you help?

Disordered eating can be involved in the deficiency, but athletes may also just be unaware of how much they need to eat in order to play ultimate, which we know is a very high-demand sport. Give players access to sound nutritional advice, focused on quality of eating (such as whole/unprocessed foods, water intake, protein intake) instead of quantity of eating (calorie counting) and help them avoid crash/fad dieting or other restrictive dieting, especially during adolescence. Discuss increased energy expenditure at tournaments and encourage appropriate calorie intake.

Show or connect players with role model athletes with a variety of body types. Encourage athletes to build self esteem in areas other than how their body looks and reinforce separation between performance and aesthetics.

Encourage players who menstruate to be open about their menstrual cycle and/or track it (many apps exist for this now). Amenorrhea is a medical term for when a woman fails to menstruate before the age of 15 or misses 3 or more consecutive periods. This is considered a serious sign and a medical professional should be consulted.

And most importantly...if any athletes exhibit signs of possible RED-S, work in a team with the player, their family, coach, and health care professionals such as a psychotherapist, nutritionist, physical therapist, athletic trainer, and physician to support the athlete and get them the help they need.

Note: Current information on both RED-S and the Female Athlete Triad is primarily available on cisgendered individuals. Transgendered and non-binary athletes can also be at risk and should work with their healthcare team to ensure they are getting adequate nutrients during sports.

Anna Kilbourn is a licensed physical therapist and certified ABPTS Orthopedic Clinical Specialist working in sports medicine, with special expertise in acute injury management, post operative treatment, and working with female athletes. She has been playing ultimate for 15 years, including recently as a member of the Detroit Riveters. Anna strives to combine her intimate knowledge of the sport with up to date medical evidence in order to help ultimate players become better athletes, take care of their bodies, and recover faster from injuries.