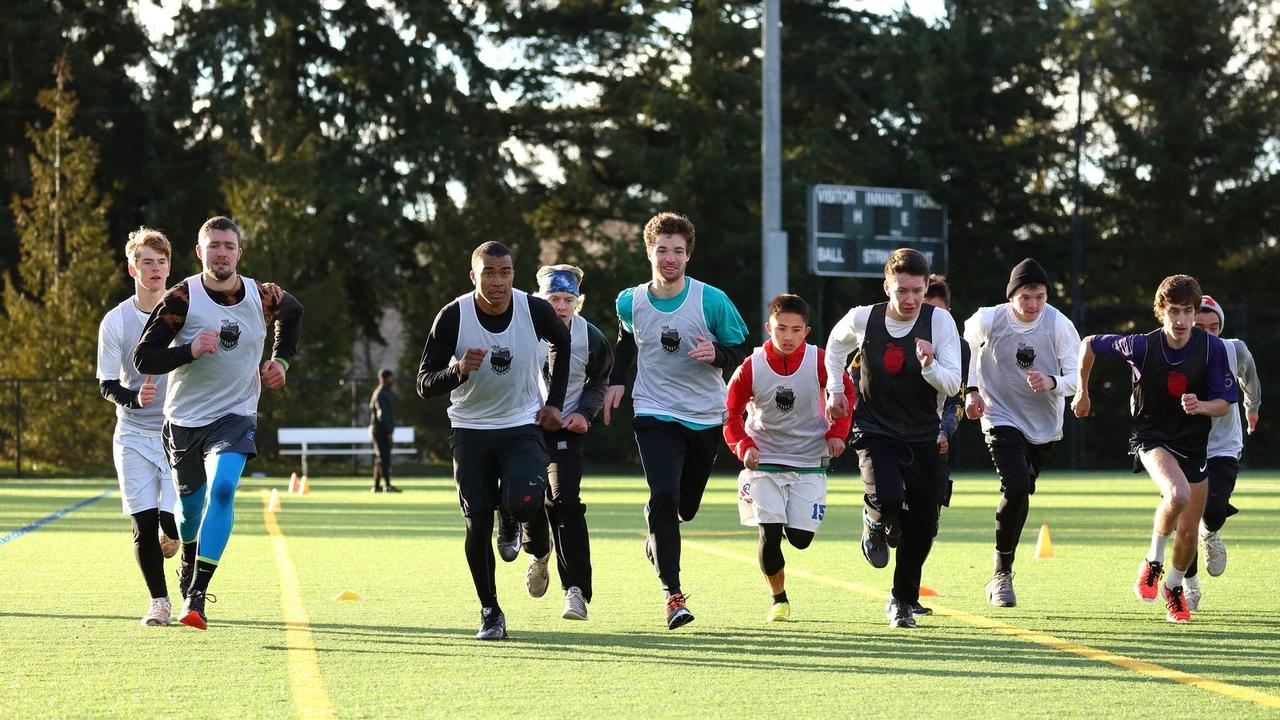 How do we know if we are training hard enough for tournaments? How can we make sure our bodies are prepared to handle the strains of a weekend competition without breaking down? As players or coaches, we must make sure that our practices prepare us and our teams for competition as much as possible. We plan our practices over a season and try to “peak” at tournaments. All this planning can quickly be derailed if your team succumbs to injuries over a gruelling tournament weekend. While you can never prevent every injury, there are some steps you can take to minimize the risk to your players.

There has been considerable research done on measuring training load as it relates to injury risk, and Tim Fergus has spent considerable time reviewing this literature to distill the findings down to something that any ultimate coach can understand. Tim has already written about tournament recovery, and now he has prepared an URCA Classroom presentation on preparing for tournaments. In this video, he explains the concept of tracking training load and applies it towards managing load on players around tournaments.

Before we understand how to manage training load, we need to understand what that actually means. Training load is an estimation of the volume and intensity of the training players undertake. This consists of both external loads, such as miles run, weight lifted, time spent exercising, and internal loads like heart rate and blood lactate levels. While it is easy to track many external loads, tracking truly objective internal loads can be prohibitively expensive and difficult for ultimate teams.

However, research has shown that an effective substitute for this can be to simply ask the athletes to rate a practice intensity on a scale of 1-10. This is termed the “rate of perceived exertion” (RPE) and will be the most cost effective way to measure training load for any ultimate team that can’t sweet talk their way into a partnership with a university research lab. Therefore, we can define training load as shown below.

For example, imagine you have a 2 hour practice. You ask an athlete how difficult she felt it was, and she thinks it was fairly intense, but not the most strenuous thing possible, and rates it 7/10. Multiplying 7 x 120 minutes = 840 AUs. AU stands for arbitrary unit—its only function is to measure against other practices.

After tracking training loads at each practice, we can start to compare our weekly total of AUs between weeks. The measure that Fergus presents in his video is called the “Acute to Chronic Workload Ratio” (ACWR). ACWR compares any given week to the average of the previous 4 weeks of training to give an idea of how much load an athlete is taking on this week (acute load) compared to what their body is used to taking (chronic load).

Here’s a graph that shows the ideal ACWR. The green “sweet spot” represents when injury risk is at its lowest: between about 0.75 and 1.25. An ACWR of 1.0 would represent a weekly training load that exactly matches the average weekly load of the previous month, so it makes sense that this would be when injury risk is lowest. On the contrary, a very high (>1.5) ACWR exponentially increases injury risk. Perhaps surprisingly, a low (<0.5) ACWR can also increase injury risk, with no load as risky as 1.5 times the weekly load. When it comes to weekend tournaments, though, a low ACWR is a rare thing indeed. 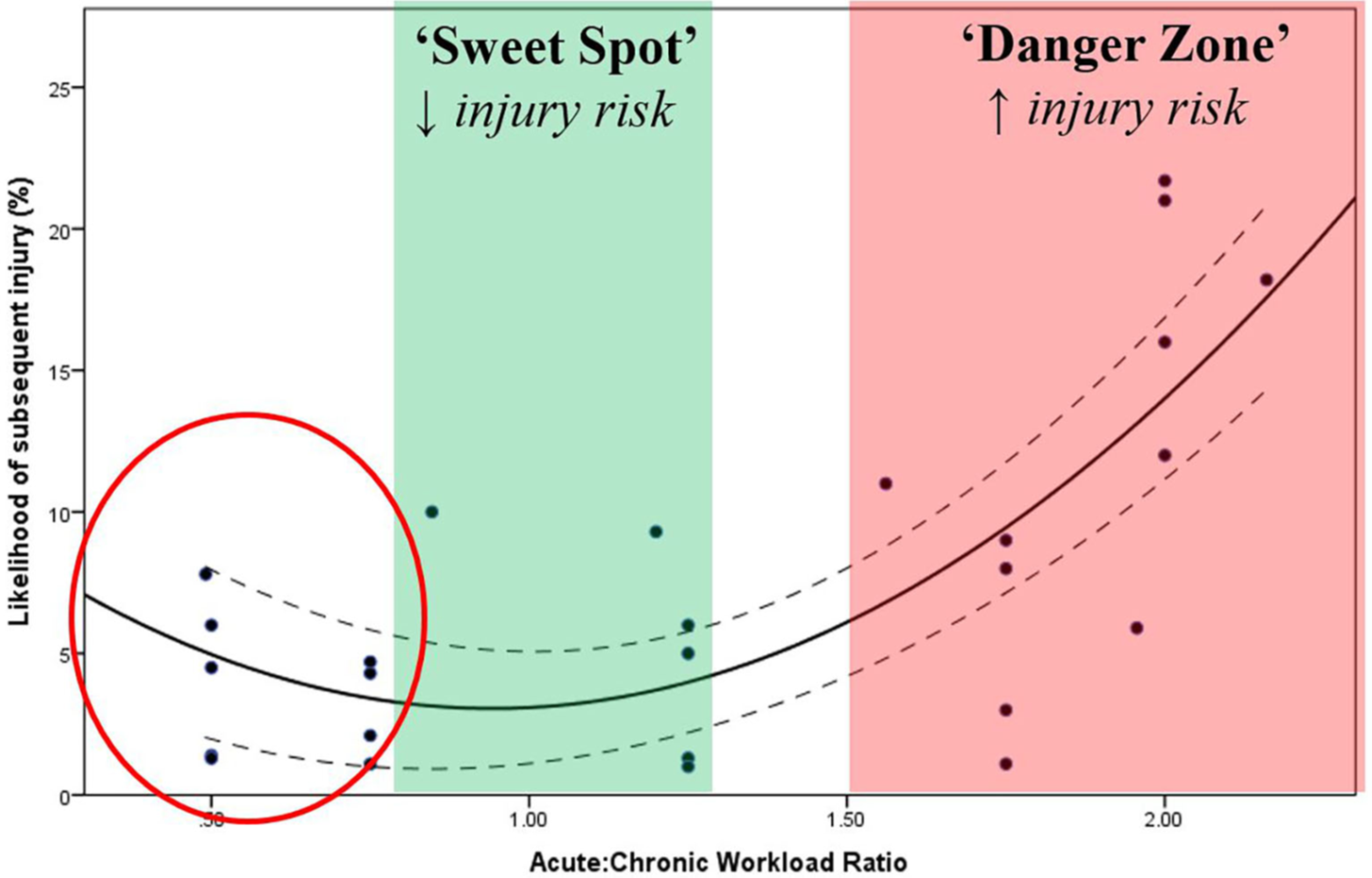 The following chart provides an example of what an ultimate coach may come up with after tracking training loads. Each practice is a 3 hour session, rated between 5-7 out of 10. Note that the ACWR does not show up until week 4—this is because it compares the current week to the previous 4 weeks, so it cannot be calculated until you have at least 4 weeks of data.

It is clear that this training program is insufficient. The ACWR for the tournament week is 1.53, which is in the “danger zone” for injury risk. To better prepare his or her athletes, a coach should start to increase the training load gradually before the next tournament.

What can we take away from all of these numbers and research? For one, if you are interested in measuring this data, you have to start tracking it. Asking players to rate practice intensity on a scale of 1-10 is not difficult, but in order to have meaningful metrics, you must ask a consistent sample of players in a consistent manner. The ideal is to ask the same players their RPE 30 minutes after the end of each practice, but practicality may dictate otherwise. As long as you are consistent in your approach, you will have useful data to work with.

Tracking training load is not the only method to make sure your athletes can perform at their physical best. As well as Tim’s previous posts, which draw again from a vast collection of scientific literature on the topic, you can check out our “Food for Thought” post about nutrition before, during, and after tournaments to ensure that you are eating as well as you compete.

Be sure to tune in this Thursday the 25th for Tim’s presentation! Starting at 8am, the talk will be live and free on the URCA Spotlight page for 24 hours only. There’s still enough time to calculate your team’s ACWR leading into the US postseason—don’t let your chances of snatching that bid be derailed by injuries!