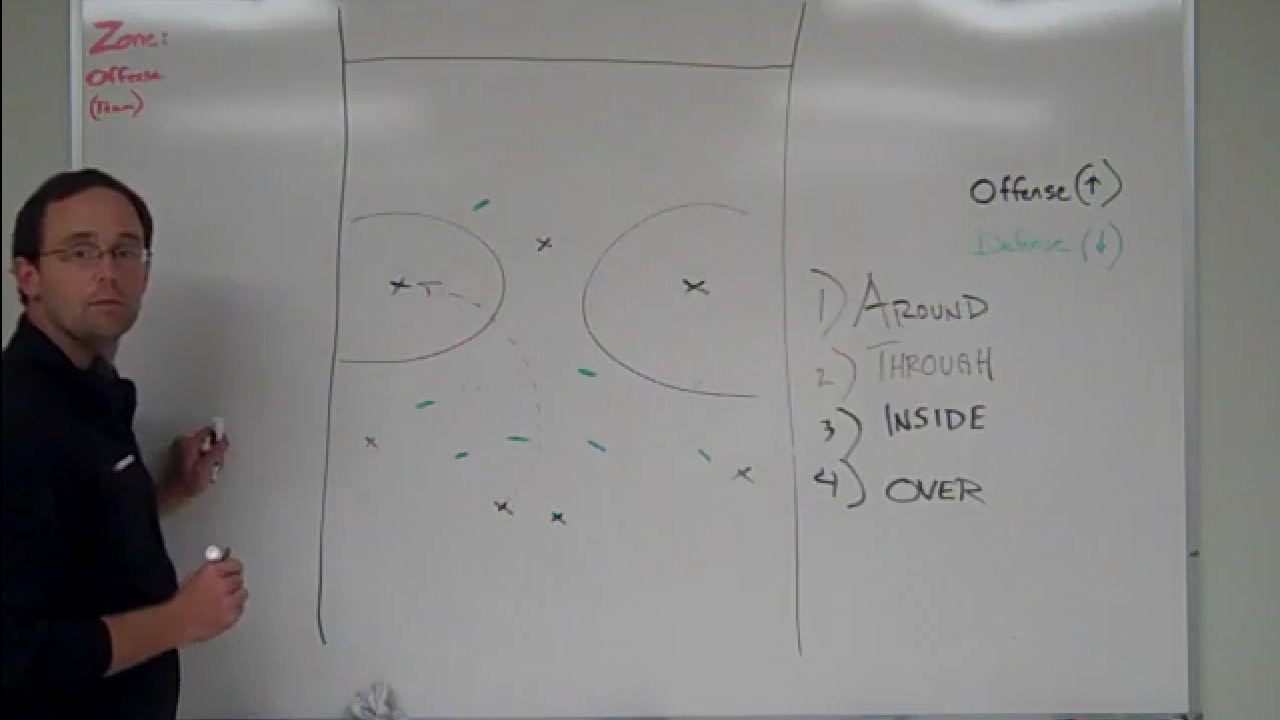 Every team has faced a tough zone defense that they just can’t seem to crack. In the most popular URCA video of all time, Ben Wiggins systematically deconstructs every strategy for both zone offense and defense. After watching the presentation, you will be equipped with the knowledge to lead your team past any zone. In this post, we will examine the ways that an offense’s priorities should progress as a typical zone adjusts throughout a point or game. For example, zones that aggressively pressures the thrower to stop forward passes may be susceptible to an around attack by the offense. We will see that defenses continue to adapt their formations as we find new holes in them, all the time giving up different options to the offense.

Step 1: Establishing the Around

“Swing the disc!” If you’ve ever coached or been coached, you’ve heard this mantra. Moving the disc laterally is often the first principle to success in any offense—and zone offense is no different. If the defense is allowing throws to go from sideline to sideline for any gains, your team should take those throws. These throws are often uncontested, and your team may be able to gain 10-20 yards by simply swinging the disc a few times, as shown below. If the defense does not adjust, you could even work the disc all the way to the endzone without ever throwing a difficult, contested throw.

Depending on the level at which you are coaching or playing, it will take varying amounts of time for the defense to adjust. In elite-level club games, a defense may make several adjustments throughout the point. In more beginner-level games, the adjustments may come solely between points. Regardless, every zone will eventually adjust if the offense is gaining free yards by swinging the disc from side to side. Whenever a defense makes these adjustments, an efficient offense can themselves adapt by moving to step 2. 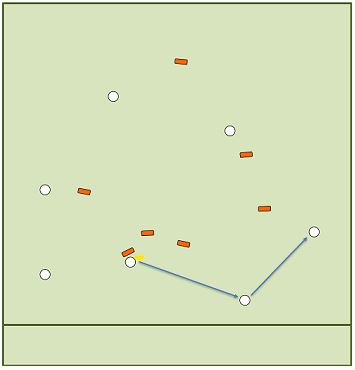 Establish the Around: The offense has gained positive yards by avoiding the defenders and throwing around the zone.

Step 2: Attacking Through the Defense

After the offense has found some success swinging the disc, the defense will adjust their positioning to contest these lateral throws and deny the free vertical yards gained from them. This is most often done by spreading the front defenders, as shown in the picture below. These front defenders are now in a position to contest both swing throws from the first diagram, making the around a riskier option. When the front of the zone spreads, this will open up throws through the defense. Great throwers may be able to open gaps for through throws right away by faking, but any offense that has successfully established the around will eventually be able to find these same holes in the defense.

As the front of the zone spreads, several downfield offensive players should assume the role of “poppers,” looking to occupy open alleys of space in between the front and the second level of the defense. After establishing the around, these alleys will become wider, allowing for easier throws through the front. 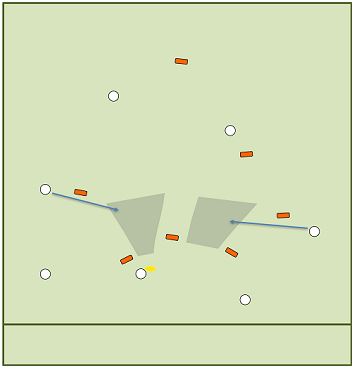 Attacking Through the Defense: As the defensive front spreads out, poppers look to receive through throws in open spaces behind the front.

Step 3: Moving Inside the Front

Successfully completing just a few through passes can often move your offense down the length of the field, so defenses are typically quick to make adjustments that deny these throws. One common way defenses adjust is by dropping the front defenders farther away from the disc. This allows them to deny the open spaces that your poppers are looking to exploit, while maintaining the ability to attack wide throws around the defense. This moves you to Wiggins’ third step to combating a zone defense: moving inside the front. 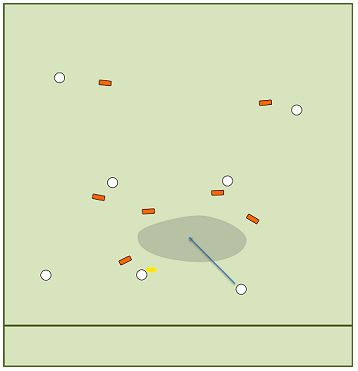 Moving Inside the Front: As the front sags back, handlers can receive yards inside the defense. This can be coupled with the new thrower looking for a quick through throw to a popper.

Step 4: Throwing Over the Defense

If sagging the front defenders does not work, then the defense must resort to moving extra defenders forward to help the front defend the around and through throws, without giving up inside gains. When this happens, the offense around the disc suddenly becomes very cluttered, with little gains possible by throwing to nearby teammates. What this adjustment opens up are the over throws. These overs (hammers, blades, etc.) are thrown to deeper offensive players occupying the vast open spaces behind the second level of the defense.

Many coaches shy away from teaching overheads to all players as a fundamental part of a throwing arsenal, but this last adjustment demonstrates the value of having effective overheads throughout your roster. These throws do not have to be pinpoint accurate throws straight into the player’s chest; they only have to be thrown into the large open space where the player can track it down and catch it.

A crucial note to successfully completing overhead throws is that the last back defender must be forced to guard an offensive player away from the spaces being thrown to. If the deep defender can guard 2 players at once, then the offense will have trouble finding open overs. If this situation occurs, the deep offensive players should spread out and force the last back to pick only one player to guard, leaving the others open for an overhead throw. 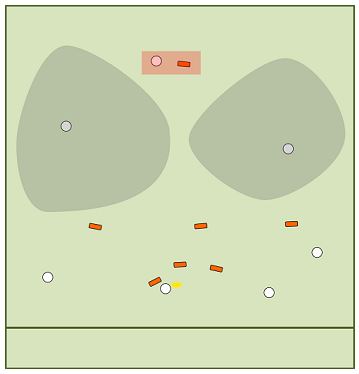 No two zones are exactly the same! It is important to be aware that certain defenses will force you to start at step 2, or 3, or to cycle through these adjustments in a different order. For example, a team may initially present a very aggressive zone, requiring an offense to immediately look to overheads. Depending on which defenders drop back to cover this space, and what space is left open, the offense may then either attack the around, throw through the front, or move inside the front.

You can find the full (1:20:00!) video in the URCA Certification package. In addition to the concepts described above, Wiggins’ presentation includes:

Along with all of this, the URCA Certification package contains 12 more videos to teach the most critical skills of coaching ultimate. Completing the course will grant you URCA certification, and help you become the best coach you can be!  For UK and Canadian coaches, you may be eligible for development points from UKU and Ultimate Canada.

After playing ultimate with the University of Oregon and winning the Callahan Award, Ben moved to Seattle and joined the team for Sockeye's first title run in 2004. As a captain and primary offensive handler, Ben would go on to win two more UPA championships with Sockeye as well as two silver medals at World Championships. Along with Andy Lovseth, Ben founded and ran The-Huddle.org, a high-level strategy and tactics online magazine for ultimate. Previously the coach of Seattle Voodoo, Ben is currently retired from playing ultimate.