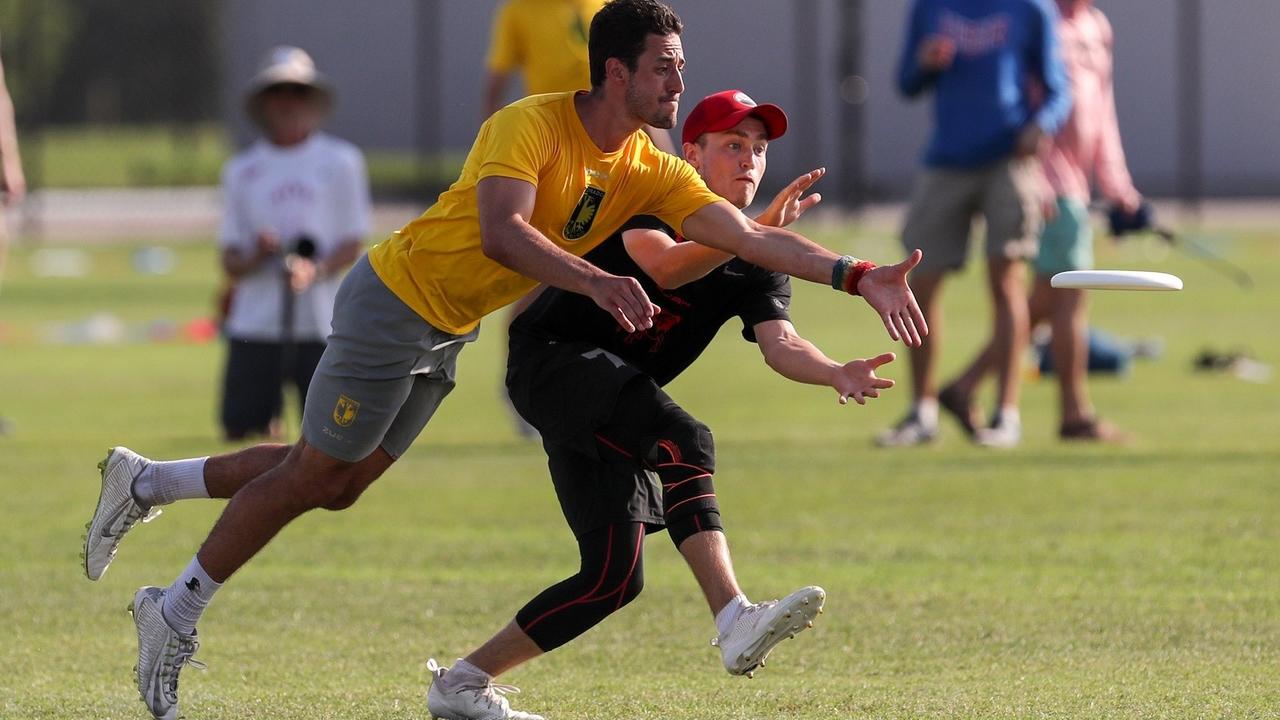 Photo by Paul Rutherford for UltiPhotos

Every team relies on person-to-person defense at some point. For many teams, this defense, also known as “match-up” defense, is the standard defensive set. As a coach, captain, or team leader, you therefore need to be equipped with the tools to teach proper match-up fundamentals. At its core, person D is a series of individual match-ups. If your team has a system that each individual on your team understands and can execute, you will win many of these individual match-ups, and start producing more turnovers.

The ACTOR system can help you accomplish this. In his classic URCA Classroom video, Keith Raynor lays out a framework for teaching your players critical skills with a helpful mnemonic: each letter of ACTOR stands for the 5 basic principles to teach your players. This post will provide an outline of Keith’s system. You can find the full talk in the URCA Classroom, or, if you’re not a subscriber, you can watch the video on Thursday. The full video includes breakdowns of each concept, complete with live practice footage, drill designs, and game tape to reinforce the lessons.

What does ACTOR stand for?

As stated above, each letter of ACTOR stands for a teaching point for person D. Here is what each stands for, in full:

Each of these is a critical skill that your players must understand to become great match-up defenders. However, you also want to make sure you can use this system to talk in games. Because some of the labels are rather long and hard to yell from across the field, here are some shortened keywords you can use to simplify things:

You will find that it is much easier to communicate with these shorter phrases than the originals. So, what does each ACTOR point actually mean?

Your players should maintain a good athletic stance before their offender ever begins to cut. A good athletic stance is one that prepares the body for movement. The key to achieving this are to make sure that the knees are bent, feet about shoulder width apart, with the player balanced on the balls of their feet (no flat feet!). Staying balanced is crucial—you don’t want your players leaning or crouched. They should instead maintain a neutral spine with a low center of gravity. Check out the screenshot from Keith’s presentation for a side-by-side look at a proper athletic stance (left) compared to a poor stance (right). 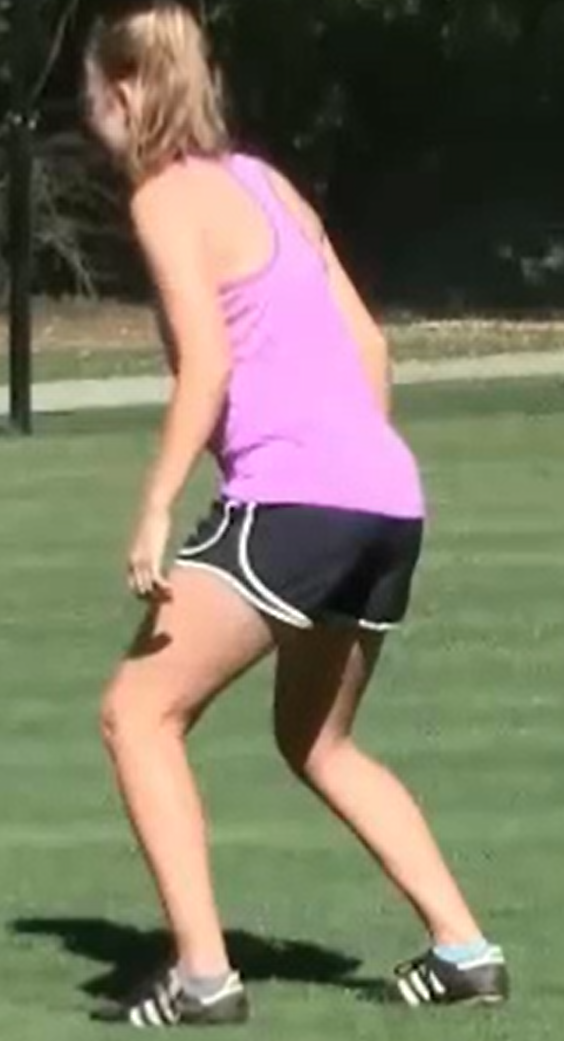 Keith tells his players that, as the defender, you always want to be the second person to make the big commitment in your “relationship” with the offender. While the phrasing may sound light-hearted, this advice is actually exactly how your defenders should operate. If the defender commits their hips before the offender, the offensive player will be able to simply run the other way to get open without contest. 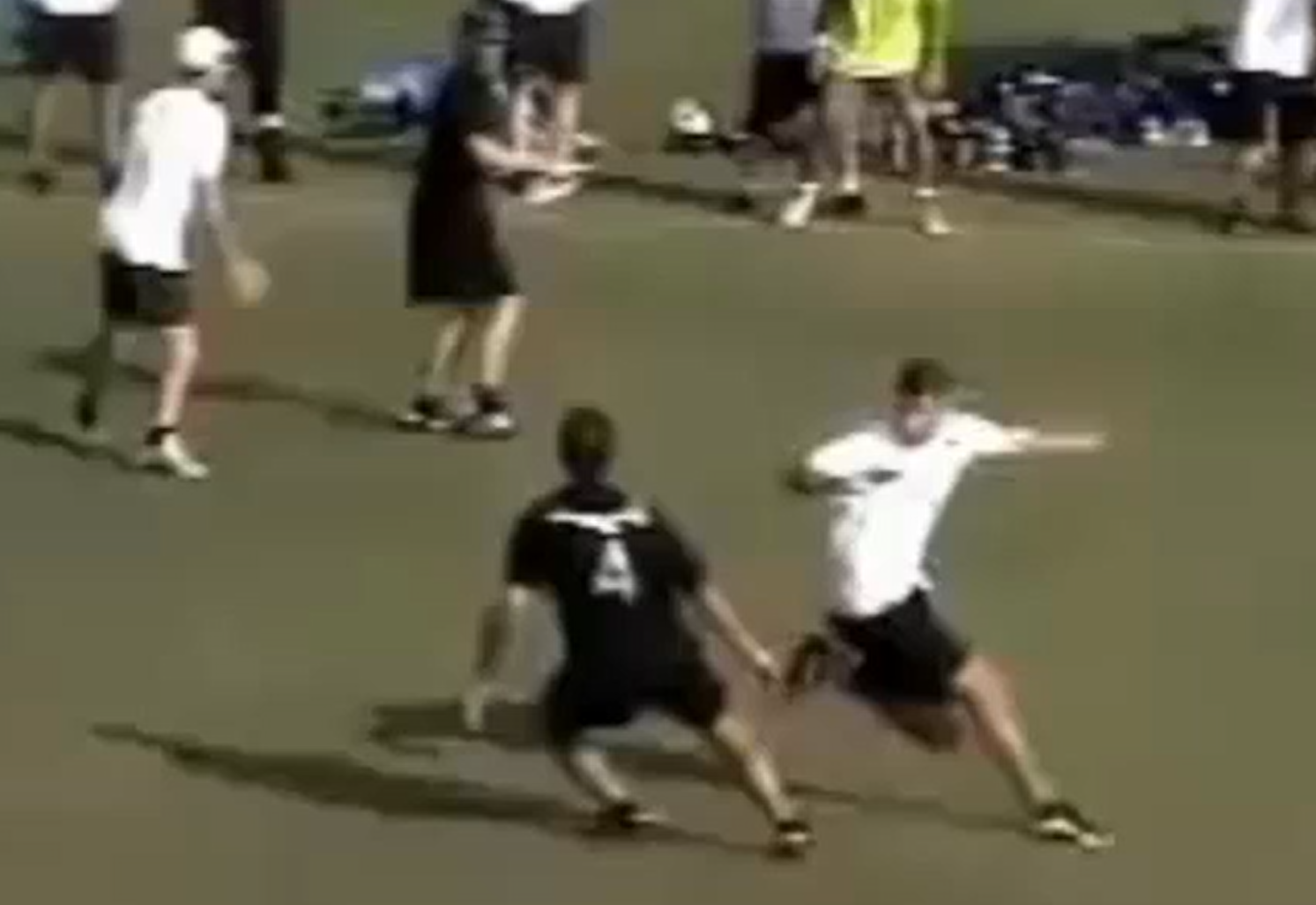 In this screenshot from the presentation, we see a defender who has made the mistake of committing his hips too early in one direction, allowing his mark to open up space for an easy reset. To avoid committing first, teach your players to react to offensive jukes and fakes with side-to-side shuffles. This technique will allow them to stay with their cutter without resorting to turning their hips. Defenders should be taught to keep their eyes on the cutter’s hips—once they’ve turned, react as quickly as possible to chase the cut.

The concept of triangulation is that your defenders should, upon activating, form a “triangle” with the three points being themselves, their match-up, and the disc. Defenders should then work to keep track of the latter two points as much as possible—always be aware of where your person is, and keep track of where the disc is. This information can be very valuable in anticipating where the cutter will try to attack, and help a defender prepare to take that space away. This is not the only information that can be useful. By keeping an eye out on the field, smart defenders will also be able to find opportunities to help out their teammates with a poach or switch.

There are, however, times when triangulating is not feasible. For example, when a cutter has committed to going deep, the defender should run with them until the threat of a deep shot has passed (e.g., the cutter clears, has gone too deep, or the sideline communicates that the thrower has looked away). Once this threat is over, though, defenders should be ready to triangulate again. Below, we see an example from practice where a defender is learning to triangulate. 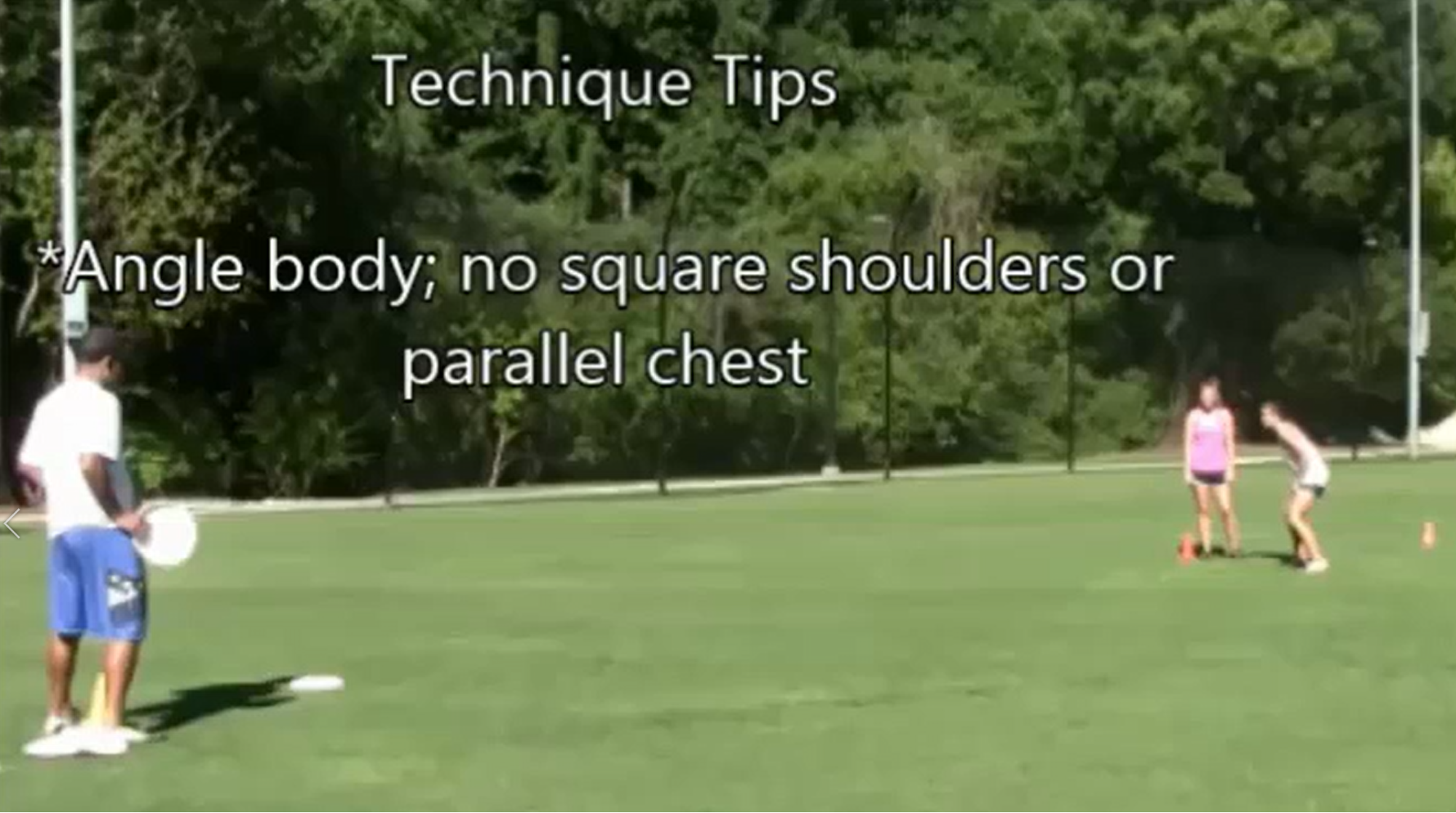 O- One Thing to Take Away

Because of the inherent advantages that the nature of ultimate provides to the offense, it is nearly impossible for defenders to individually negate every option completely. Rather than aiming at an unrealistic goal, teach your defenders to take away “One Thing.” This one thing can vary depending on your team philosophy, matchups, or weather conditions. The important skill to develop in your players is the ability to focus on shutting down a single, primary objective while still challenging the alternatives.

A common example to illustrate this point is “no unders.” In a “no unders” person D, downfield defenders aim to deny the space between the cutter and the disc. The offense is open deep, but by activating, shuffling to maintain positioning, and react quickly, the defense will still be able to contest all but a perfect deep throw.

Here, you can watch a short clip from Keith’s presentation where he introduces this concept himself!

Repositioning is the simplest ACTOR point to explain, and yet can be one of the most difficult to implement in your team. The idea of repositioning is that after defending an initial cut, a defender should begin playing defense before the offender cuts again. Many players, especially younger ones, will use this time on defense to rest and lose their defensive focus. Consequently, they are often unprepared to defend a second cut after successfully defending the first one. When working on repositioning in practice (Keith has a great drill for this in his presentation), make sure you familiarize your players with the term “Repo.” This will help in games, as you can correct defensive lapses by shouting “Repo! Repo!”

Putting It All Together- The 3 Person D Drill

Here is a drill that you can run in practice to implement the ACTOR system: 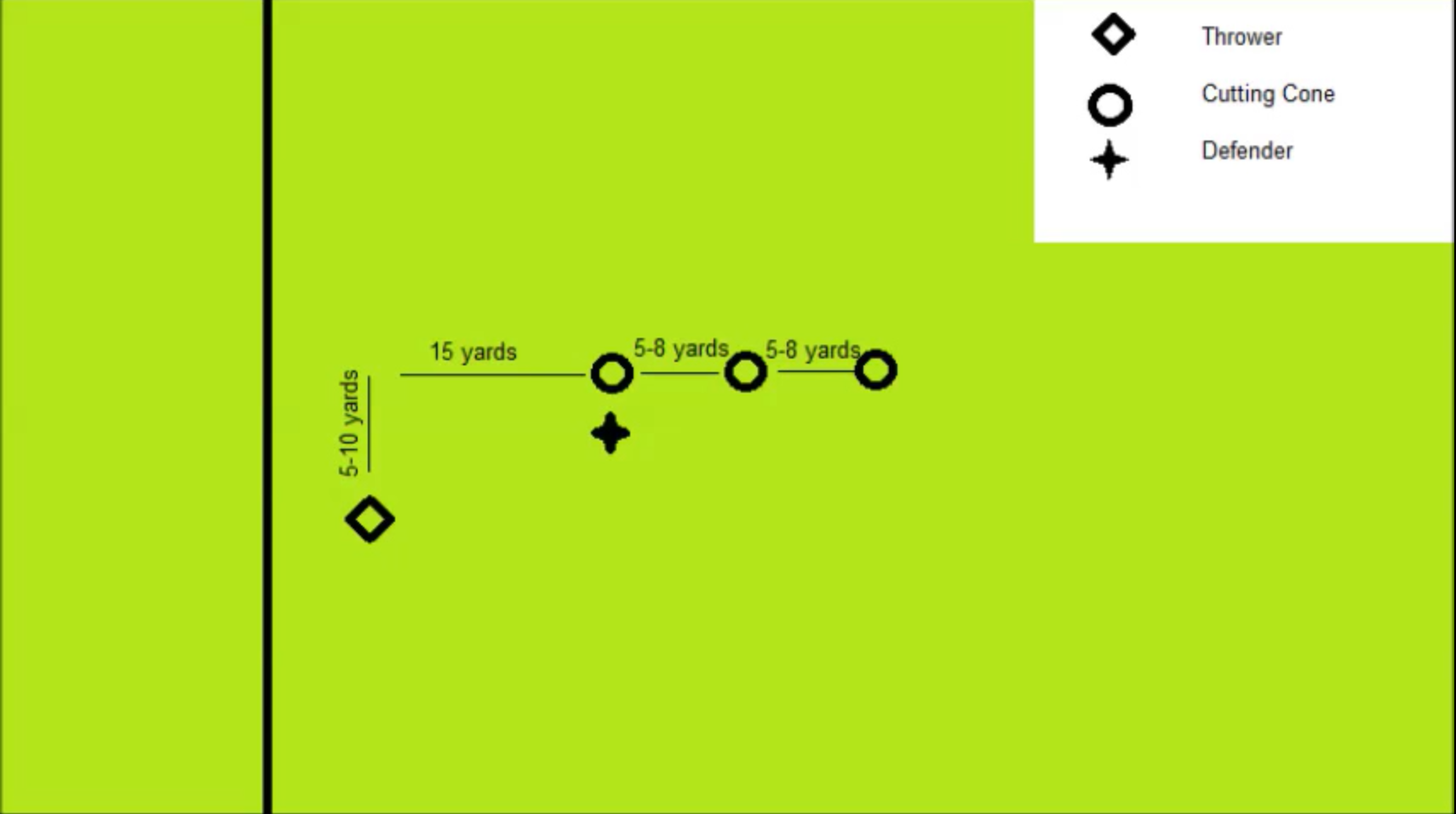 In this drill, you will have a thrower with the disc at the diamond (a mark is optional but encouraged). Each cutting cone (the circles above) will have an offensive cutter. One defender will start at the first cone. When the disc is tapped in, the first cutter tries to juke the defender and cuts either in or out. Once the cut is completed, the defender sprints to the next cutter, defends their cut, then sprints to the final cutter, and defenders that cut. The defender then rotates out of the drill, with the cutters moving down the line, and one cutter becoming the defender (you can modify the rotation however you see fit). When players are not active in the drill, encourage them to be an active sideline by communicating to the defender.

This drill helps reinforce all of the ACTOR principles. Through verbal cueing, you can make sure that they are in an active stance before the disc is tapped in. The fact that there are 3 successive cuts allows players room to experiment with different positioning, to take away different things, and to triangulate more efficiently. During the cut, you should praise your defenders for shuffling and only committing their hips after the offensive player.  Additionally, the sprint back to the next cutter allows for an opportunity to work on repositioning.

By teaching your players the ACTOR system in person D, you will ensure that your team has the individual skills required to win match-ups and force turnovers. To learn more about the ACTOR system, how to teach it, and what it looks like in real game scenarios, be sure to tune in on Thursday, May 30th, to see Keith’s full presentation.

Among many great videos, the URCA Classroom contains two fantastic complements to this talk that we’d definitely recommend as follow-ups to Keith’s talk. The first is Alex Davis’ “Defensive Positioning for Shutdown Defense,” where you will find a nuanced breakdown of the positioning, footwork, and reactions required to truly evolve your players into a shutdown defender. The second video is Kaitlynn Lovatt and Carla DiFillippo’s “A Team Approach to Match-Up Defence,” where you will learn to implement your team’s newfound individual skills into a deeper team strategy.

To join the URCA Classroom, click here!
Or click here to register your interest and hear when the talk goes live!